It is easy to imagine what would have happened had Palestinians invaded an Israeli military base and vandalized vehicles, burned tires, thrown rocks at the brigade commander and injured his deputy. It would have ended in death, injury or arrest for many of them. But the perpetrators of this week's incident were Jews, not Palestinians, and they threw rocks at both soldiers and Palestinians.

The explanation voiced for the killing of Mustafa Tamimi, who died after being hit in the head by a tear-gas canister during a demonstration in Nabi Saleh on Friday, was that the young Palestinian man had been throwing rocks at an armored Israel Defense Force jeep. Even had that been true, one cannot ignore the disparity in the response to the stone-throwers in each case, where the only difference was their being Arab in one case and Jewish in the other.

The increasing incidence of settlers throwing rocks at Israeli soldiers and at Palestinians, without incurring return fire from the IDF, proves the hypocrisy of claiming that shooting is a justifiable response to Palestinians who throw rocks. And Tamimi didn't invade a military base; he was trying to protect his village from the settlers who seek to invade and expropriate it.

The proximity of the two incidents invites comparison, but the disparity in the response has long been evident. Demonstrating Palestinians are met with force - sometimes deadly - and arrests. Jews in the territories, even when they riot and use violence against Palestinians or the army, are usually accorded what amounts to immunity by both the military and the judicial establishments.

The disparity of response is the symptom of the broader problem, that of the fact of two populations living in the same territory, where each one is under a different legal system and is treated differently by the military. Israel is selective in its imposition of its law on the settlements and the settlers, creating a regime that discriminates on the basis of national identity. Sometimes Israeli law even applies to Jews who live in the West Bank but are not Israeli citizens.

There is a reason why international law prohibits occupying powers from settling its population in occupied territories. One of the outcomes of such a practice is the de facto annexation of the territory, with the occupying power giving its own nationals broader rights than it does the occupied population. That is the scenario that had played itself out in the West Bank.

Under the current circumstances, when one population and its army are allowed to rule over and use violence against another populuation, it should not come as a surprise that sometimes violence is also directed at the IDF.
Posted by Quique at 11:49:00 PM No comments: Links to this post

In Israel, the life of a Palestinian is cheap


When it comes to shooting a Palestinian, pulling the trigger does not come with a real fear of having to answer to the law.
Haaretz Editorial

The pictures from Friday's events in Nabi Saleh are hard to swallow: An Israel Defense Forces soldier opens the back door of an armored military jeep and, from a distance of just a few meters, fires a tear-gas canister directly at a young man who is throwing stones. After the canister is fired, the jeep continues on its way without stopping.

A photographer on the scene relates that the young man "fell to the ground, remained conscious for a few seconds, and then began bleeding profusely from the region of his eye." He was subsequently evacuated for treatment at Beilinson Hospital, where he was sedated and placed on a respirator. On Saturday, he died from his wounds.

The incident took place during the weekly demonstration held by residents of Nabi Saleh against the expropriation of their land in favor of the nearby settlement of Halamish and the settlers' takeover of a spring that served the Palestinian residents. The young man who was killed has a name - Mustafa Tamimi, 28, a resident of the village and regular participant in the demonstrations that have been taking place there every Friday for the past two years.

The IDF Spokesman's Office said in response that "the army is looking into the incident." But one needs to wonder about the use of the term "looking into." A report published last week by Yesh Din-Volunteers for Human Rights, which examined 192 complaints - including an analysis of the content of 67 Military Police investigations into various types of severe harm to Palestinian civilians and their property - reveals that 96.5 percent of the total number of complaints are closed without indictments.

The reasons for this are varied - the lack of Military Police bases in the West Bank, professional shortcomings in the Military Police investigations, victims who retract complaints for fear of losing permits or suffering harm at the hands of soldiers they have complained against. But the conclusion is obvious: When it comes to shooting a Palestinian, pulling the trigger does not come with a real fear of having to answer to the law.

On the day Tamimi was killed, Chaim Levinson published a report in Haaretz that dealt with the failings of the Israel Police's Judea and Samaria District with regard to investigations into harm to Palestinians. Concerning the killing of 10-year-old girl Abir Aramin by the IDF in early 2007, the High Court of Justice ruled that the incident was improperly handled; and to date, no one has been called on to answer for the 2009 killing of demonstrator Bassem Abu Rahme. Will the death of Mustafa Tamimi be added to the statistics that show that in Israel, the life of a Palestinian is cheap?
Posted by Quique at 12:25:00 PM No comments: Links to this post

Nebi Saleh, a day after the Human Rights day 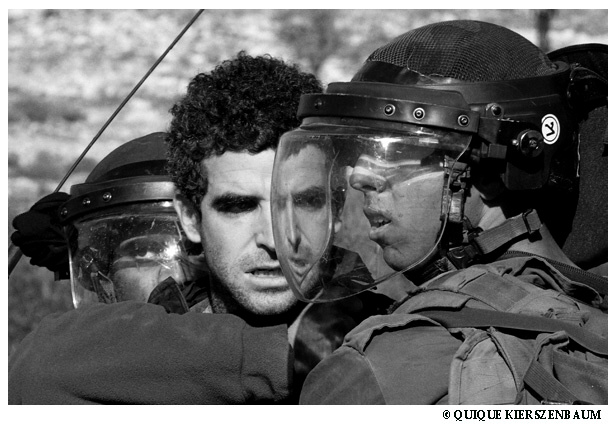 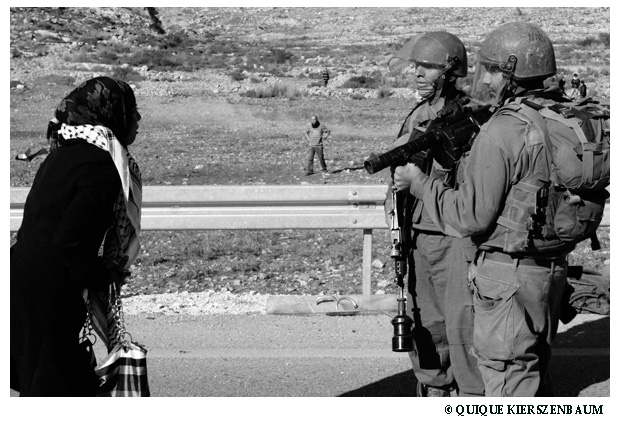 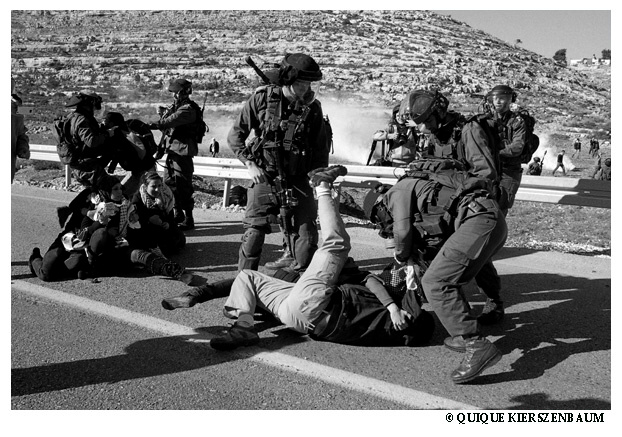 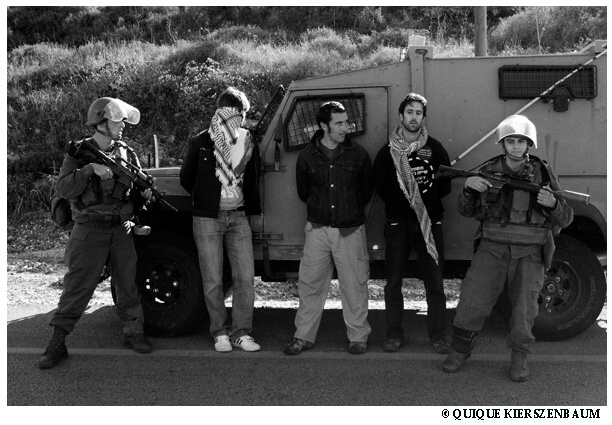 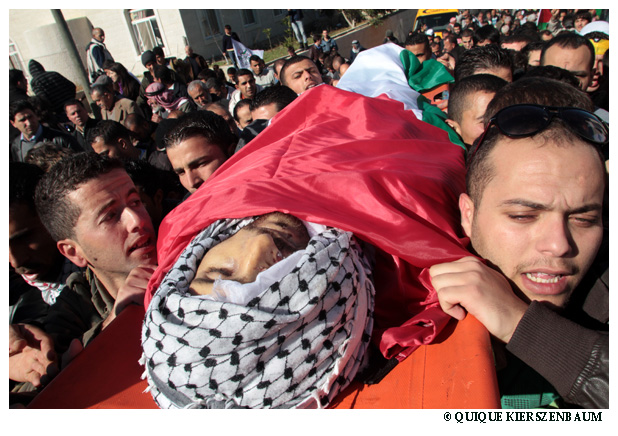 Mustafa Tamimi laid to rest in the West Bank village Nabi Saleh, two days after he was hit in the head by tear gas canister fired by IDF soldier.
Three people were hurt and eight were arrested on Sunday at a demonstration in the West Bank village of Nabi Saleh following the funeral of a Palestinian protester killed over the weekend at a local protest.
Posted by Quique at 12:19:00 AM No comments: Links to this post 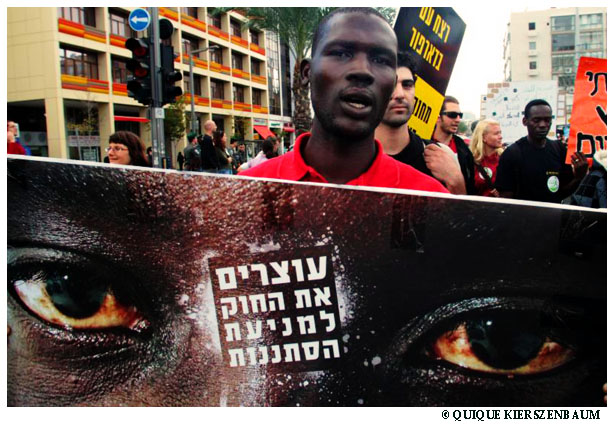 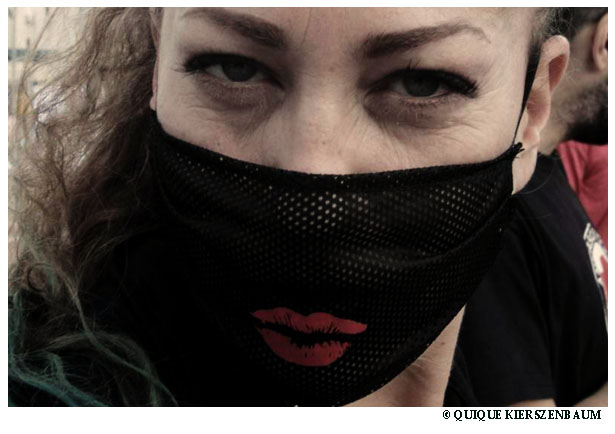 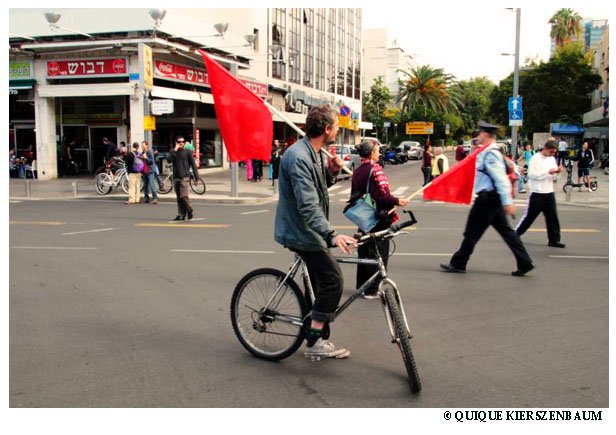 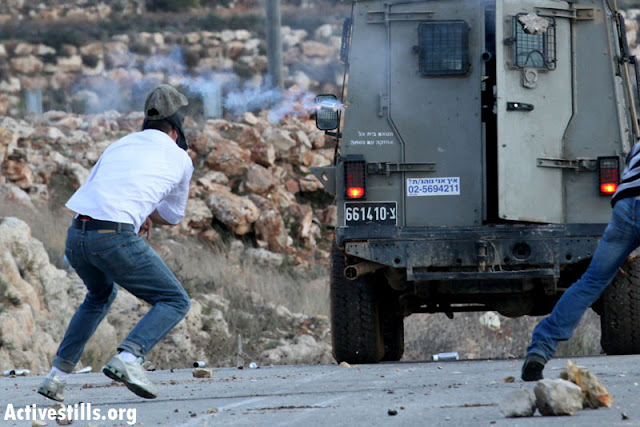 
Mustafa Tamimi, a 28 year old resident of Nabi Saleh, was shot in the face yesterday, during the weekly protest in the village of Nabi Saleh. He sustained a critical head injury, under his right eye, and was evacuated to the Belinson hospital in Petah Tikwa. The severe trauma to Tamimi's brain, caused by the shooting, left the doctors with little to do to save his life, and he eventually passed away at 09:21 AM today.
Posted by Quique at 9:45:00 PM No comments: Links to this post 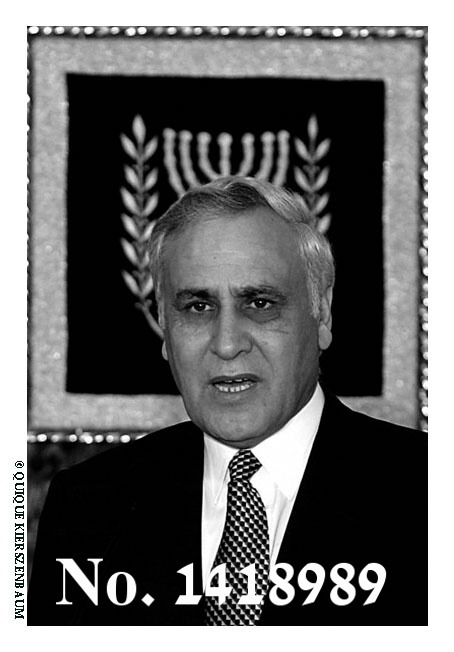 Moshe Katsav convicted of two counts of rape, sexual harassment and obstruction of justice.
Posted by Quique at 8:24:00 AM No comments: Links to this post