Teaching the language of Occupation in the best school: Hebron

A private outing in Hebron, following the education minister's decision to encourage schoolchildren to visit the Tomb of the Patriarchs

(C) Photos Quique Kierszenbaum
Posted by Quique at 6:04:00 PM No comments: Links to this post

Thoughts about the future - Graffiti in the West Bank 01 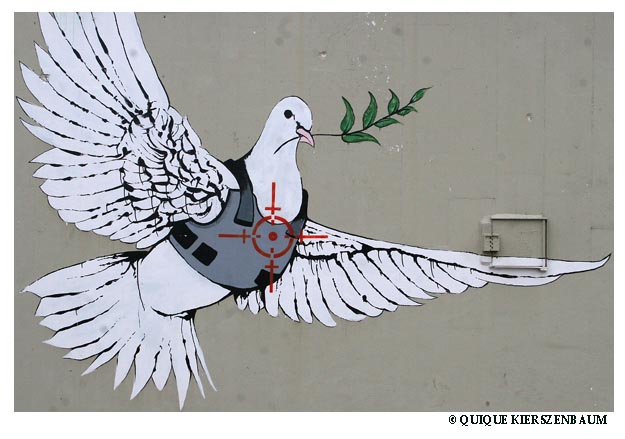 A Banksy graffiti in Bethlehem, not a new one, but one of my favorites.
Always so relevant.
Posted by Quique at 8:56:00 PM No comments: Links to this post

Talking about a revolution song


All around the nation
the word is liberation
the poor are fucking tired from this discrimination
by the people who are trying to bring us down
From Washington to Tel Aviv to Teheran
you better pick your shit up and start to run
because we are raising our head like an Akbar lion
Gaddafi, Abdullah,Ahmadinejad
we’re gonna kick your ass out in a storm of Jihad
salamat, bye,bye, you ain’t never gonna see them
they may take our lives
but they will never take our FREEDOM

by Shmemel
Posted by Quique at 9:40:00 AM No comments: Links to this post

'Our lives became something we'd never dreamt': The former Israeli soldiers who have testified against army abuses. 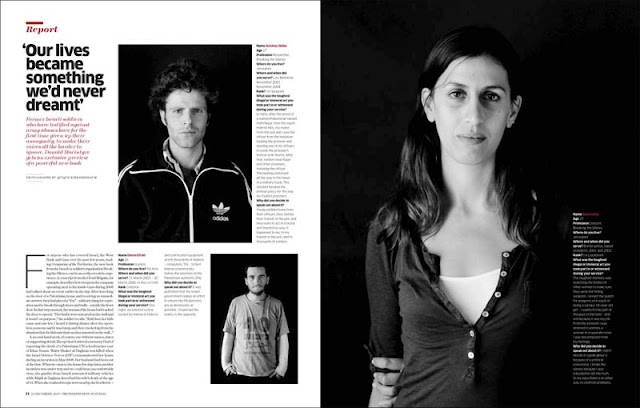 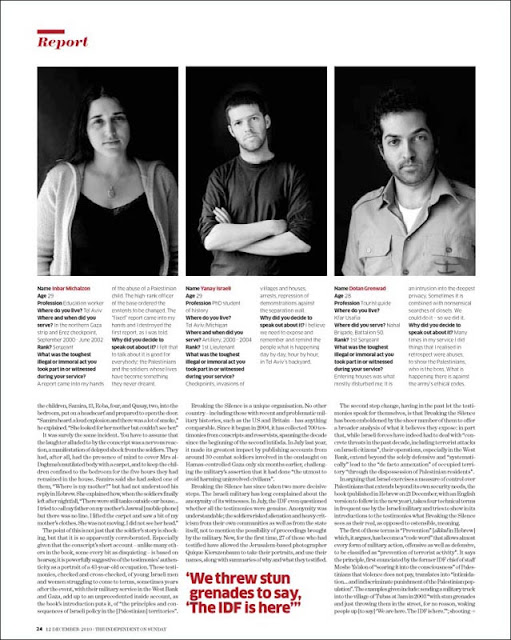 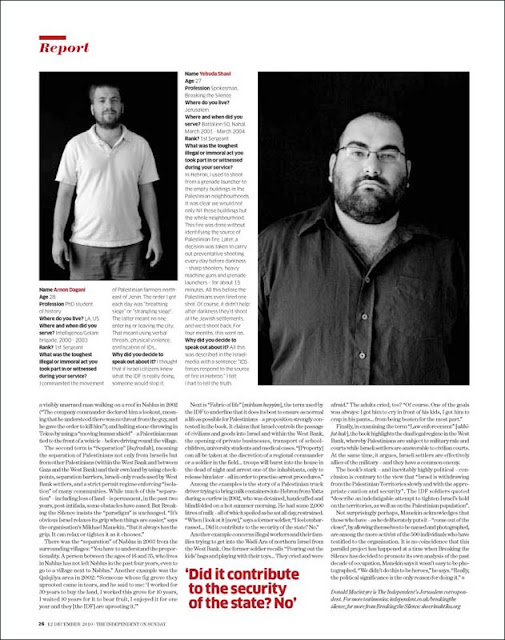 'Our lives became something we'd never dreamt': The former Israeli soldiers who have testified against army abuses

THE NEW REVIEW - THE INDEPENDENT ON SUNDAY

Memories of Hawara Checkpoint in the West Bank

Bad memories of the Hawara checkpoint, abandoned this week by the IDF: winter and summer, in rain and burning sun, we would stop here and wait.

By Gideon Levy, Haaretz, 18/2/2011
A few sparrows perched on barbed wire, flew off and settled on another part of the fence - symbols of freedom, chirping and soaring happily in the air. The winter sun drenched the deserted checkpoint; just a few cars drove idly by. In winter 2005, exactly six years ago, a soldier stood here and told a Palestinian ambulance driver that "not even a bird can go through here."
The Hawara checkpoint was removed this week; soldiers left its fortified guard booths. The parking lot, which was always jammed with noisy yellow taxis awaiting pedestrians who managed to cross, was empty. So were the "carousels," where masses of people were packed together like animals; also empty were the isolation booths and the crossing spots for the handicapped. No longer did speakers blare orders ("get out of here" ) from Israeli soldiers, in Arabic. No longer do you see soldiers hurling rocks at taxis that dare approach the crossing point, nor can you see civilians with their hands tied and eyes blindfolded sitting on the muddy ground, waiting for hours, in wind, rain or blazing sun, as soldiers decide their fate. Nor can you spot wheelchairs stuck in garbage-strewn earth, or residents carrying refrigerators on their backs. There are no soldiers holding X-ray photos up to the sunlight to decide whether people really need to get to the hospital.
Hundreds used to attempt passing through this checkpoint each day, to get to work, studies or a medical procedure. Trying to get past it was a routine part of their lives. The peddlers market, where cheap coffee and sweets were sold, has disappeared. Gone too are the police, Border Police and Shin Bet security officials; also missing are the Israeli officials' cheerleaders, the settlers. It looks as though nothing ever happened here.

But this is a venue whose ground is soaked with the blood of the dead and wounded, whose walls once witnessed cries of injustice from the days of shame and years of humiliation. This was perhaps the cruelest crossing point in the territories, the main entryway to the most besieged city on the West Bank.
We entered one of the fortified inspection booths, and for a second, I imagined I was a soldier. Plants and bushes are beginning to climb the iron fences; in recent months, the atmosphere here had become calmer. When the checkpoint was in full swing, virtually no Nablus resident was allowed to go through in his car. The only way through was to walk, and to be humiliated. An Israeli flag still flaps in the air of the abandoned checkpoint, looking particularly alienated. Suddenly, out of nowhere, a soldier turned up in one of the hallways. In a patronizing voice reminiscent of the imperious style of days gone by, he barked: "Get out of here. What are you writing? That it's good we've left the checkpoint? Just one terror attack, and we'll be back here."

We were here during times of want and misery, times of terror attacks or routine, days of closures and curfews. Winter and summer, in rain and burning sun, we would stop here and wait. Hours of waiting, hours of expectation of what might happen under the corrugated roofs. Sometimes we managed to cross; sometimes we had to infiltrate Nablus via the mountains that encircle it.
This week, we stood at the site and remembered. We remembered that 10 years ago, in January 2001, IDF soldiers blocked the transport of 10-year-old Ala al-Salwid to the hospital in Nablus after her appendix ruptured. She died. In September 2008 an infant born at the checkpoint died when soldiers refused to allow its parents, Muayad and Nahil Abu Rideh to to go through and reach a hospital. Army sources later informed us that "the infant would have died in any case;" but due to the disclosure of this incident, the squadron commander was ousted.
Seven years earlier, in September 2001, another pregnant woman, Amana Safdi, 19, was delayed for no less than five hours at the checkpoint; her infant was stillborn. At the nearby Beit Furik checkpoint, which was also abandoned this week, several infants died at birth; we wrote about them in this column. In September 2003, Rula al-Shtiyeh collapsed next to the checkpoint's cement blocks. The baby she was carrying hit a boulder and was killed. Particularly gruesome is the story of two pregnant women who were shot and wounded on two consecutive days at Hawara during the gloomy month of March 2002, when the second intifada reached its peak.
A cancer patient, Taisir al-Qaisi, died at the Hawara checkpoint in the winter of 2007, after the intifada had abated throughout the territories, but not at Hawara. Mortally ill, Qaisi wanted to die at his home in a refugee camp outside Nablus. He was held up for 90 minutes at the checkpoint; he sat in the back seat of a cab, a vehicle defined by a soldier at the checkpoint as an "unauthorized taxi," until he died.
In July 2004, a Palestinian peace activist, Issa Souf, was held up at the checkpoint. Souf has been wheelchair-bound since IDF soldiers fired at him from close range in his home. He described how he was thrown from his wheelchair to the side of the checkpoint, where he waited for five yours in the sun. Souf published a letter to the two soldiers who shot him, saying "I pity you for having turned into murderers." A few months later, he wrote to those who has detained him up at Hawara: "I said to the soldier: my wheelchair is my authorization; I am paralyzed. But he threw me aside, forcing me to wait five hours in the sun."
It's quiet at the checkpoint. A police jeep has started a random inspection of vehicles that entered or left Nablus. A few soldiers can still be found at a watchtower; they hide behind bulletproof windows, and observe what's going on, until the checkpoint is totally abandoned.

In July 2008, I visited the checkpoint en route to the Balata refugee camp in Nablus with a delegation of human rights workers from South Africa, including a Supreme Court judge and several members of parliament. When we reached Hawara, the bus fell silent. The country's former deputy defense minister, Nozizwe Madlala-Routledge, was shocked. "What I'm seeing here is worse than what we experienced," muttered this apartheid opponent.

This week, we got into the car, quickly sped across the checkpoint and entered the city. Unlike some other West Bank cities, Nablus hasn't returned to itself; the scars of 10 years of battles and oppression are still visible there. We crossed the city quickly from south to north to west, and left via the Beit Iba checkpoint, which is also rife with bitter memories from the not-so-distant past. This week, a group of idle soldiers were stationed here.
Seven years ago, I wrote about a beleaguered Palestinian man at this spot: "He strode with difficulty, resting on the shoulders of his son, one step after another, until he was on the brink of collapse. He had just marched three or four kilometers on foot, on his own trek through the West Bank, via the torments of going from one checkpoint to the next. Slowly his eyes welled with tears. At the end, he burst out weeping: 'Perhaps you can help me, please.'" This week, at the same spot, there was a group of bored soldiers, and almond trees bloomed at the side of the road as though nothing had ever happened here.
Posted by Quique at 1:05:00 PM No comments: Links to this post 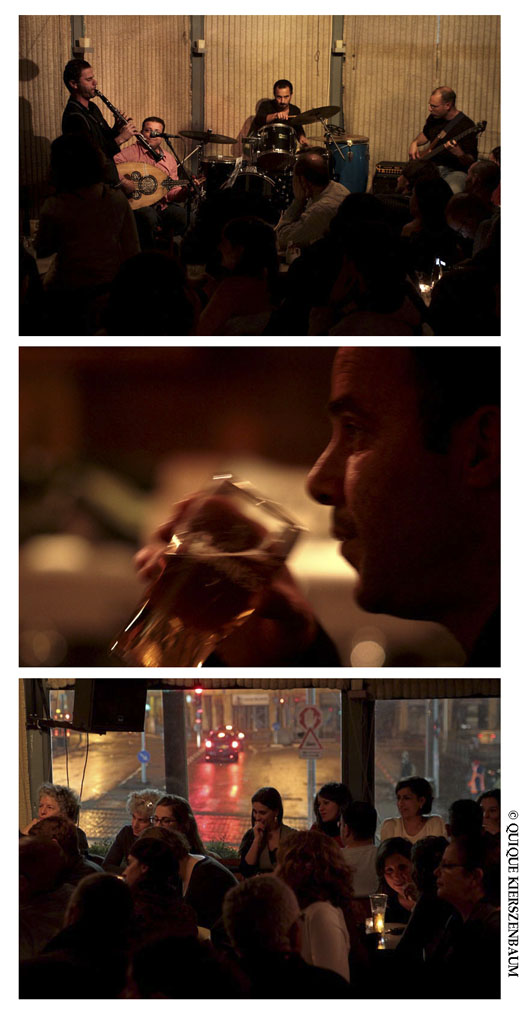 Another great performance of Na'am this time at Avram Cafe in Jerusalem, on a cold night, great music and atmosphere.
Posted by Quique at 10:57:00 PM No comments: Links to this post 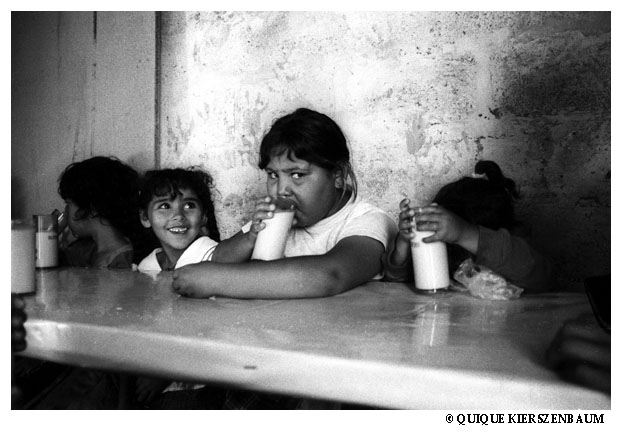 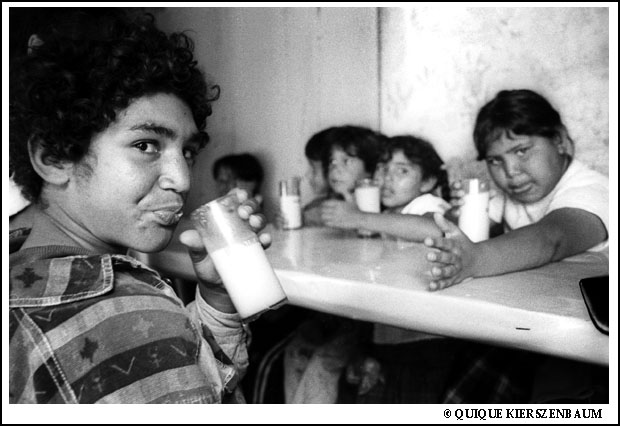 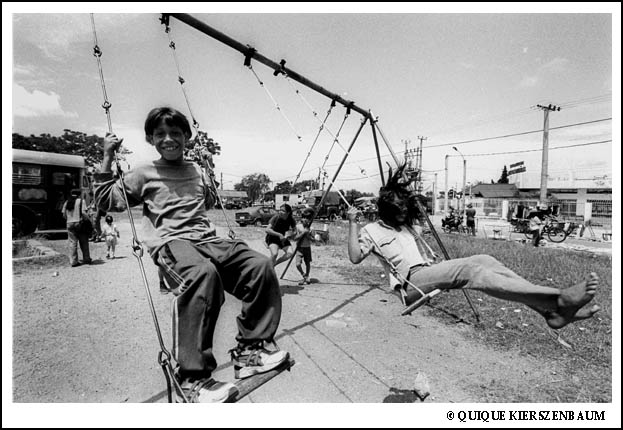 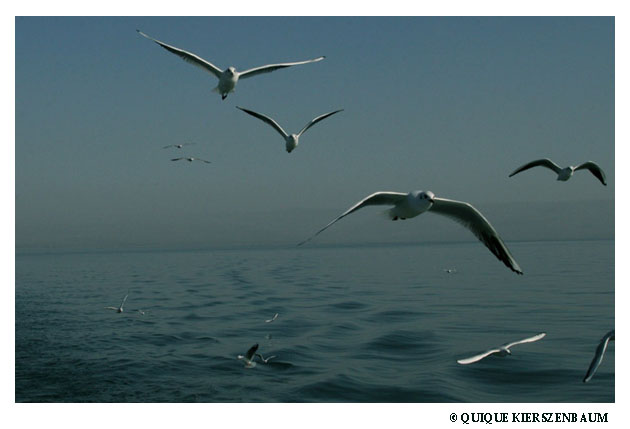 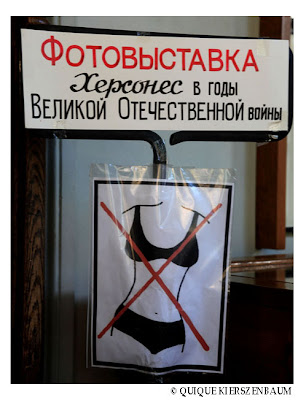 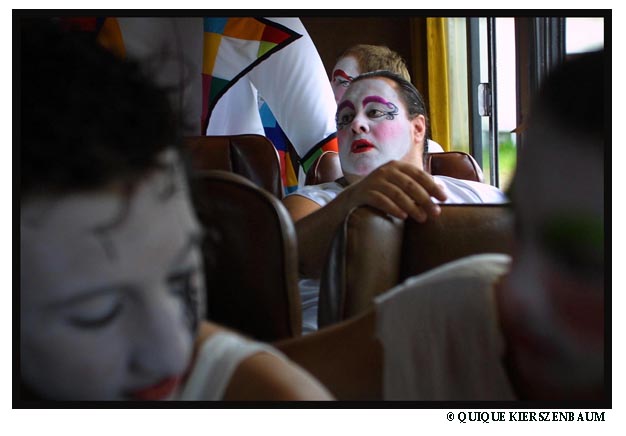 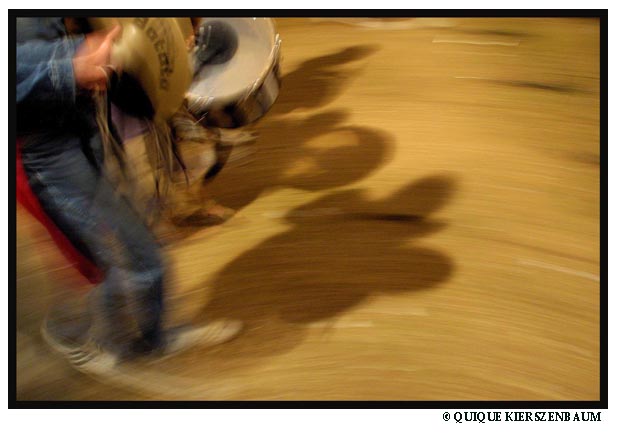 MURGA CONTRAFARSA - CARNAVAL URUGUAYO
Posted by Quique at 11:01:00 AM No comments: Links to this post

Yemanja - the "Goddess of the Sea" 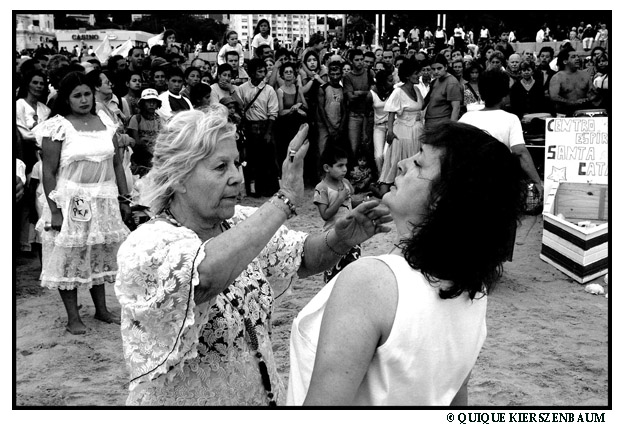 An unidentified Mae, performs a “santiguado”, the cleaning of the aura of a person from negative energies, during celebrations of Yemanja, , the "Goddess of the Sea", in Ramirez beach, Montevideo, Uruguay. According to Mae Susana about 500.000 people take part in the celebrations, part of them believers of the Umbanda religion, and part of them believers of other religions. Believers pay tribute February 2 to Yemanja, asking for work, love and money.

THE FIESTA OF THE SPIRITS - UMBANDA
Posted by Quique at 3:05:00 PM No comments: Links to this post