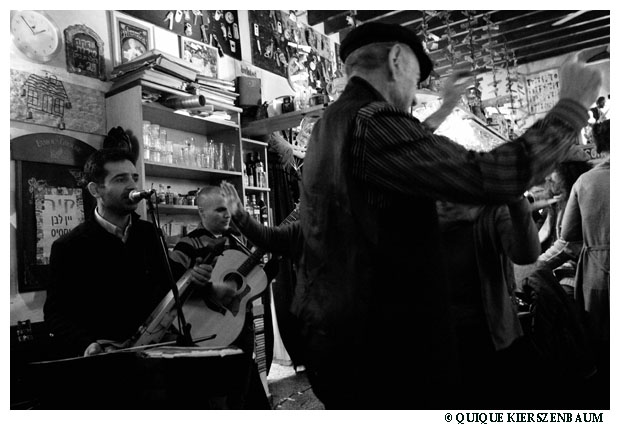 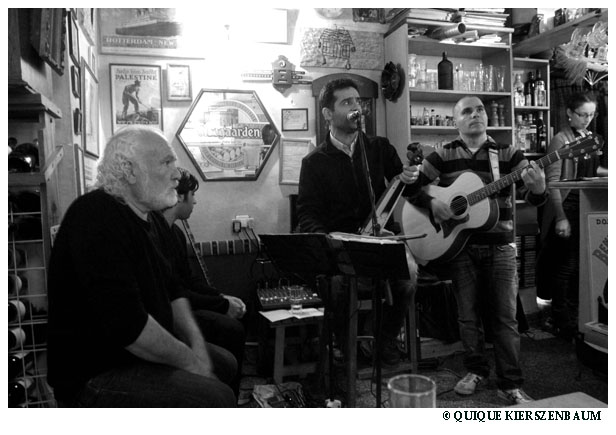 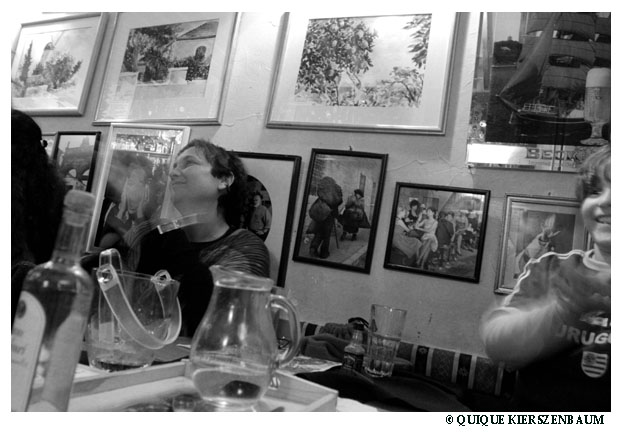 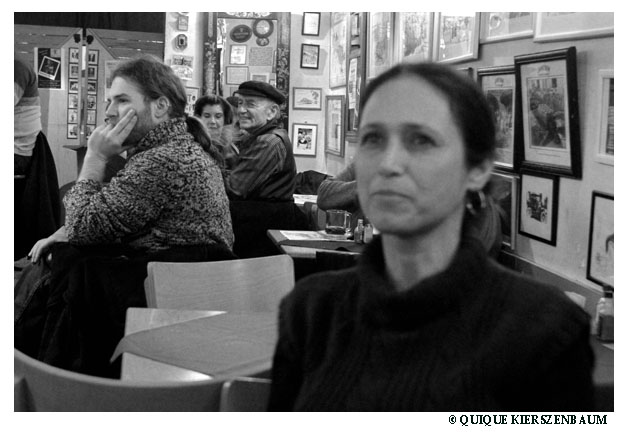 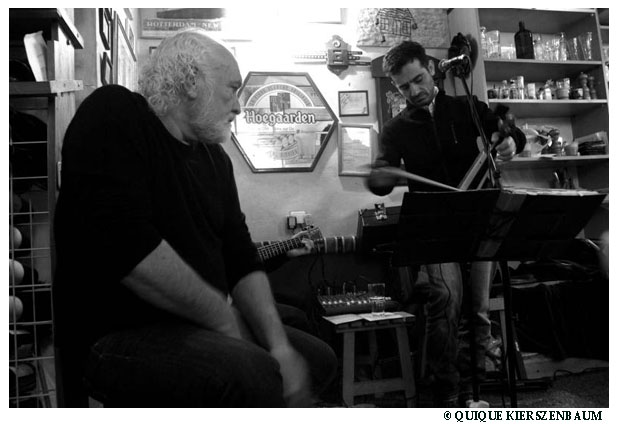 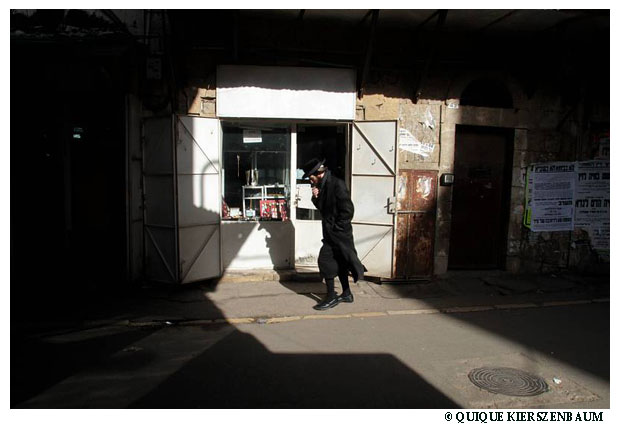 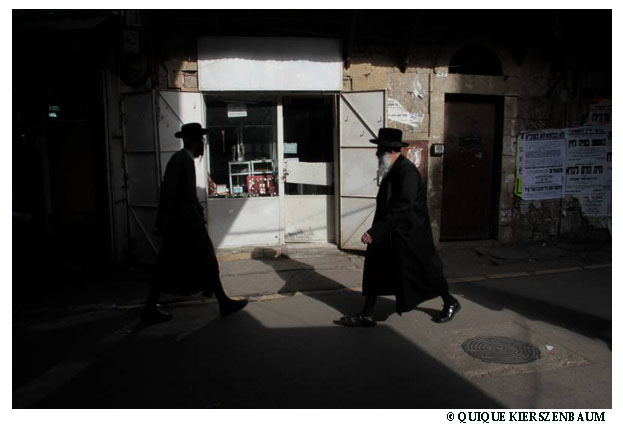 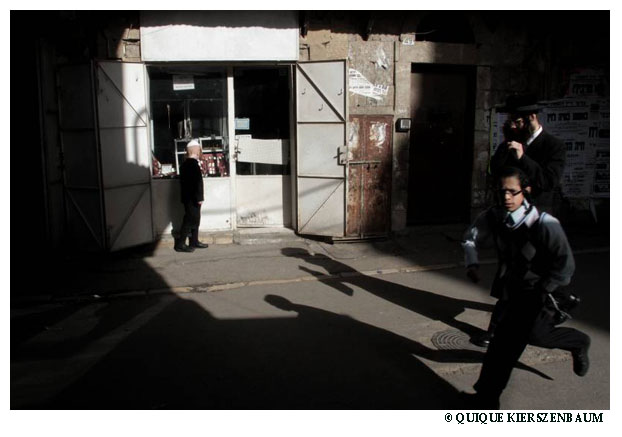 WOMEN SEGRGATION IN THE NAME OF GOD

Less than half a mile away, young Israelis mix in bustling bars in central Jerusalem, anathema to this religious ultraorthodox community that has tried its hardest to hide itself away from the temptations of secular life, and ensure a rigorous separation between men and women.

Ironically, though, it is the ultraorthodox community's efforts to impose its religious values on ordinary Israelis, particularly women, that many fear is undermining Israel's democracy, and which now poses the greatest threat to this community's survival.

When Tanya Rosenblit, a 28-year-old woman from Ashdod, boarded a Jerusalem-bound bus late last year, she caused a stir by refusing to heed the demands of a religious male passenger to move to the back of the bus. Many of the ultraorthodox – known as Haredim – believe that modesty forbids women to sit at the front of the bus with the men, and it is common to see segregated buses with women seated to the rear, often crowded in while seats remain free at the front.

Ms Rosenblit became a minor celebrity in Israel, but her stance was not without consequences, earning her death threats for daring to challenge the religious community.

"The Haredim has always received special treatment in this country and people thought it was okay," she says. "But something has changed... in the sense that they feel they are going to control this country. That's disturbing."

The issue of creeping religious coercion over all aspects of Israelis' lives has taken on huge importance in recent years as the ultraorthodox spread beyond their traditional communities in Jerusalem and outer Tel Aviv in search of cheap housing. But the situation recently reached a head in Beit Shemesh, a town near Jerusalem, when an ultraorthodox man spat at and verbally abused an eight-year-old girl, Naama Margolese, for what he considered was immodest attire.

Not for the first time, Israel's Haredim find themselves under attack. Making up about 10 per cent of the population, this impoverished and fast-growing community has long been viewed as an economic drain on society, but now some fear that their influence is extending far beyond their ghetto-like communities.

In a potent display of their sense of persecution, an extreme Haredi sect living in Mea Shearim recently plastered yellow stars on their children in protest, a symbol of Jewish persecution from the Holocaust that resonates deeply with Israelis, and inspired widespread disgust.

Young men in Mea Shearim insist that those who inspire such hatred are an extremist minority who do not represent the Haredim as a whole. "I think modesty on the buses is okay," says one, who works in a religious bookstore, "but to force that is not the way to behave."

But his view on tolerance is not one readily accepted in this insular neighbourhood. Moments before, a Haredi man with sidelocks spat on the ground next to this reporter, who was modestly dressed, and muttered "pritze", a Yiddish word meaning prostitute.

Meanwhile, the women within these communities are afraid to speak out, says Hannah Kehat, founder of Kolech, an ultraorthodox women's group. "It's social control. If they [the women] go against somebody, the [extremists] exclude them, tell people they are not religious enough, attack them, say bad things about their families," says Ms Kehat, who grew up in Mea Shearim. "It's terror," she adds.

While segregation on buses has come to epitomise discrimination against women, it is only a small part of the story. In a conscript army where the Haredim now play an important, if small, role, women have watched with dismay as the religious soldiers boycotted events where female soldiers were to sing, insisting it was sinful.

Deputy Health Minister Yaakov Litzman, an ultraorthodox Jew, recently walked out of a hospital dedication ceremony where female vocalists were scheduled to perform, and women were barred this month from speaking or taking part in panel discussions at a fertility convention organised by a religious medical group.

Even secular companies have acquiesced to pressure to banish images of women from their advertising on Jerusalem's billboards, fearful of a Haredi backlash against their products.

In religious elementary schools, an outspoken group of parents is fighting efforts by the ultraorthodox to limit the teaching of secular subjects, and force boys and girls as young as five to learn in separate classrooms. In the past decade, says Shmuel Shattach, executive director of liberal Orthodox group Ne'emanei Torah Ve'avoda, gender separation in state-run religious schools has gone from being the minority to the majority. He recalls how the principal of his daughter's school asked fathers to leave a performance put on by eight and nine-year-old girls, and says that the modesty rules become stricter every year, with young girls told to wear skirts that fall below the knees and don ever longer sleeves.

"I believe in modesty... and not dressing provocatively, but to ask a child of five [to do this] is ridiculous," he says. It is also critically important, he believes, to allow children to mix at that young age if his son is not to see girls "as a kind of demon", and argues that religious men who refuse to sit behind a woman on a bus are driven by ignorance and fear.

To a large extent, Israel's Education Ministry is complicit in the segregation of boys and girls, preferring to bow to ultraorthodox demands than see the children moved into the private Haredim education system, where the curriculum excludes core subjects such as mathematics and English language in favour of Torah study.

Such limited education ill-equips Haredi Jews to join the workforce, meaning that most devote their lives to state-funded religious study while women, who routinely bear up to a dozen children, can ill afford the time to hold down jobs. Ultimately, it is those who work who fund the ultraorthodox way of life, breeding resentment.

"When I look at who carries the burden, I feel like a sucker," says Alon Vissier, 22, who helped organise recent protests against segregated buses. "The problem begins with the government ... the [politicians] make compromises at our expense."

Although Prime Minister Benjamin Netanyahu has insisted that "women will sit in every place", ultraorthodox politicians, represented by two right-leaning political parties, have played the role of kingmakers within successive Israeli coalitions, and politicians tread carefully so as not to alienate the religious community.

But now the battle lines have been drawn, led by an empowered Israeli mainstream that took to the streets across the country last summer to call for social reform. These same Israelis are the ones calling for the restoration of democratic values, and the curbing of the ultraorthodox community's disproportionate influence.

Whether they will succeed remains to be seen. Rachel Liel, director of the New Israel Fund, holds out little hope in the near term, arguing that the broadside on women has been made possible by an increasingly reactionary climate in Israel. Politicians have proposed a slew of anti-democratic legislation, including efforts to muzzle the media, control the judiciary and halt funding to NGOs critical of the state.

"We see Arabs struggling for democracy [in the Arab Spring] while Israel is going backwards," she says. "We are stepping back from a vibrant democracy into something which is bad."

Catrina Stewart, The Independent
Tuesday, 10 January 2012
http://www.independent.co.uk/news/world/middle-east/sexism-and-the-state-of-israel-6287448.html#
Posted by Quique at 10:45:00 AM No comments: Links to this post